11 Jul On the Serengeti Plains

On Wednesday, July 9th both Camps gathered for the special cooperative game Serengeti Plains. Teams called Herds – named after various species indigenous to Africa – complete different stations around the campus. Herds are awarded “tails” for successfully completing each challenge. The herds may complete a station two times, but not consecutively and with a modification to make the second attempt more difficult.

Members of the herd are responsible for protecting their tail that is tucked into the back of their shorts. While traveling from station to station, Predators roam the plain and will try to snatch tails as the herds travel from station to station. Team members can still participate in the events after losing their tail, but the herd becomes extinct if they run out of tails.

Tripoli Mile Island
As a team of experts in the field of radioactive wastes, you have been called upon to save the city of Tripoli from a dangerous leak in the walls of their storage tank. With each member of the group holding on to the end of each of the ropes attached to the bucket, you must find a way to transport the bucket of radioactive waste to the newly built storage tank. At no time may anyone get closer to the waste than the length of a rope. If the water spills, you must start over.

Crossing the Sahar-aaaahhhh
A river of quicksand extends for miles in each direction and is blocking your path to an oasis, the only water source you have seen in days. Only ten spots within the river of quicksand will supply safe footing, and only one person can be on each spot. When a person uses a spot they may not leave the spot or it will be lost (becomes quicksand). You may only be occupying one spot at a time. Spots are not renewable. If any one member falls, the whole team must begin again.

Shock-a Zulu
While touring Johannesburg an earthquake strikes, partially collapsing your hotel. A tangle of active electrical wires is blocking your way to the exits. Your team must pass through the wire without touching it. If a person touches a wire they must be placed back on the ground before they make another attempt. Once a person has passed through an opening in the wire no one else can go through that opening.

Waka Waka This Way
The team members’ ankles are tied together using their tails. They must then walk through the course as a group. Their feet must be in on the shape but if the foot hangs over the edge of the shape it is okay. If anyone falls off the path the whole group must return to the start.

Wavin’ Flag
The players stand on a tarp (roughly 5×8). All campers must remain on the tarp at all times. To start, they must start with the X on top and then, without touching a body part to the floor, they must turn the tarp over and end up with the top side down.

Eggs Togo
Your team of world-renowned biologists has just identified as a Dodo bird egg. The egg must be carried using only sterilized tubes and must be quickly placed in the Incubator so that it may hatch. The team must move the marble from one side of the field to the other using the sections of PVC pipe. The marble must be placed carefully in a cup to complete the task. If the marble is dropped, the team must return to the start. Team members must stay in the same order of rotation (note: if the marble is dropped, the order can be changed for the next attempt).

Kenya Change a Flat
Your team of scientists has received a shipment of four different chemicals that must be organized in a specific manner. Chemicals with a higher atomic mass cannot be positioned above chemicals with a lower atomic mass, or there will be an explosion in your laboratory. Numbered tires must be moved from the Cone A to Cone C without higher numbered tires being placed on top of lower numbered tires at any point (ex: Tire #3 cannot be on top of Tire #1). Two team members will make one move with one tire per turn. The following two team members cannot go into the space until the prior team members have cleared the area. All other team members must be behind the line until their turn.

If you cannot see the above slideshow, CLICK HERE

The Orange and Blue competition in each Camp has really heated up during the first 10 days of First Session! This slideshow contains images from time well-spent at the Waterfront, World Games, Team Cheer Competition, Dodgeball, Team Clinics and Orange and Blue games in both S4G and S4B.

Different generations of the Shafer family offered heartfelt remarks to memorialize this great man who is personally responsible for the continued excellence of Camp Susquehannock.

Read more about the life of Mr. Ed and his enduring legacy on our website.

In celebration of American Independence Day, both Camps gathered at S4B for a special day full of action and fun. Our Co-Directors Win and Cannie Shafer offered greetings and remarks on the lasting importance of the Fourth of July and drew attention to the memory of Mr. Ed Shafer, our beloved Director of blessed memory, who passed away earlier this year. On behalf of the entire Shafer family, Win and Cannie unveiled a newly-designed King’s Monument that now features a plaque in honor of Mr. Ed.

In addition to the campers and staff of each Camp, many alumni and friends of Susquehannock were present for the Fourth of July festivities in preparation for a special Memorial Service for Mr. Ed on Sunday, July 6th.

At the conclusion of the opening ceremonies, teams were announced and the traditional Field Days begun. The teams had been renamed in preparation for the day, using American ideals like “Equality,” “Democracy,” and “Pursuit of Happiness.” The Mixed age teams competed in a variety of games, including a Team Cheer, Tug of War, Water Balloon Toss and Sack Race.

The good weather and great times continued as each Camp started their respective programs after Opening Day. Ice-breaking activities and World Games dominated much of the first few days of the session and the USA World Cup match on Tuesday offered a nice break from the action.

For the 109th time in history, campers from around the world traveled to the lands surrounding Tripp Lake in the Endless Mountains of northeastern Pennsylvania. After a long off-season and many weeks of on-site preparation, the Opening Day of 2014 finally arrive! Staff members welcomed both Grizzled and new campers to the Susquehannock Camps. The anticipation for the next three weeks was only eclipsed by wonderful weather that made the facilities look even more incredible.

After many joyous reunions and first encounters, both Camps offered pick-up activities for those campers who had prepared their beds for the Session. After a delicious dinner, Co-Site Directors Win and Cannie Shafer officially kicked off the summer by greeting all during a meeting on the grass outside the Main Lodge in the Boys Camp. The S4B and S4G staff members then introduced themselves and explained details about the singular Susquehannock experience. The respective Camps separated for their own individual opening day festivities and the fun continued!

If you do not see the slideshow, please CLICK HERE

23 Jun We Couldn’t Have Done It Without You! 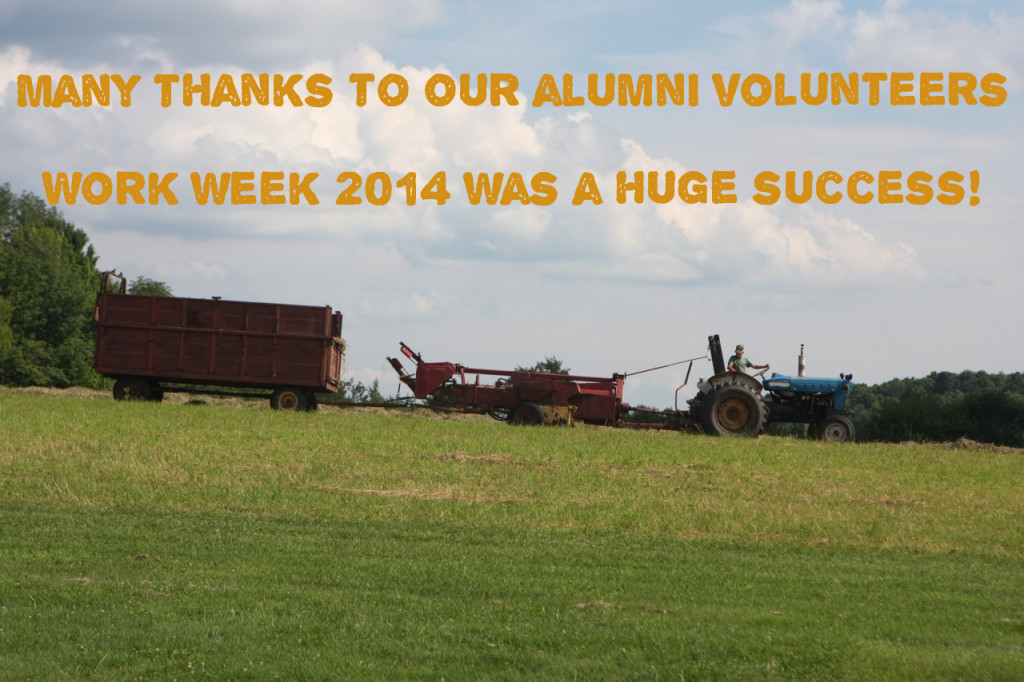 As a public service, Tony Meyers is providing a daily recap of the on-going preparation of the Camp facilities during Work Week.

Whew – what a Work Week!!  We greeted the arrival of the final group of alumni volunteers, including Nora Saunders, Rachel Zuckerman, Francie Shafer and Allie Handmen who will be helping over the weekend. We are preparing to paint the freshly-paved S4G Tennis Courts bye power washing. The athletic fields goals are have been appropriately placed and netted.
On the Hill, S4B also has goals out and prepared the various Tennis Courts. More weed-eating and some small mowing jobs still need to be done, but the campus is ready to go for First Session. With the beginning of  Training Week, I pass on the job list to Head of S4G Jay Pearcy and Head of S4B Andrew Hano.
Once again, I can’t thank enough our dedicated alumni volunteers and the staff members from S4B and S4G for their hard work and efforts this week. Without their help, we could not have gotten Camp ready without them.
Just think: one week from today campers will be arriving on this place…

Posted at 10:16h in 2014 by admin 0 Comments
0 Likes
As a public service, Tony Meyers is providing a daily recap of the on-going preparation of the Camp facilities during Work Week.
Opening Day is a week away and Camp is just about ready to go! Lifeguarding Training has concluded, the 12 passenger vans were picked up, the Waterfront has boats and only requires some lane lines. The group of counseling staff and alumni have been absolutely BRILLIANT – doing everything and anything to get Camp ready for the summer. I personally would like to thank the alumni volunteers for taking time off from their jobs to give back to Camp!
We are up to three full tables in the Dining Hal at meals and we await the arrival of additional Senior Staff members who will take the reigns for Training Week. With the manual labor completed, Training Week offers the respective staffs a chance to jell while learning the ins and outs of being a Susquehannock counselor.
Game Day is right around the corner and we are definitely prepared!