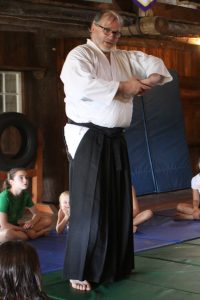 “RK” divides his time between Rockville, MD and Williamstown, MA and has spent all but three of his summers at Camp Susquehannock since starting as a 10-year-old in 1973.

RK played Varsity Squash and Junior Varsity Tennis at Williams College (Williamstown, MA), where he majored in Religion & Philosophy. After three years in Japan teaching Tennis and studying Aikido, and 2 years teaching English & History at The Marvelwood School (Kent, CT) where he coached Tennis and Ice Hockey, RK earned a Master’s degree in Philosophy at Claremont Graduate University (Claremont, CA) writing his thesis on the Ethics of Authenticity.

In 2008 RK launched The PeaceCamp Initiative, a scholarship fund which has brought several youth leaders to Susquehannock from Israel and Palestine each summer to forge bonds of friendship and trust. The PeaceCamp Initiative has brought almost 40 campers to Susquehannock since its founding, and earned RK the 2008 Ben & Jerry’s Peace Pioneer Award and the 2016 Small Business Council of America’s Humanitarian of the Year Award.

RK is currently an adjunct faculty member at Williams College, where he teaches a class on Political Aikido, and co-founder of Temple Allen Industries which builds ergonomic aerospace sanding equipment for Boeing, Airbus, Gulfstream, and the US Navy.

Lastly, RK has served since 2009 as president of Aiki Extensions, a nonprofit that brings the strategic insights and practical wisdom of Aikido into non-traditional settings. At Susquehannock, RK teaches Aikido to both Camps, and runs clinics in Tennis, Street Hockey, Juggling and Photography for the Boys Camp.