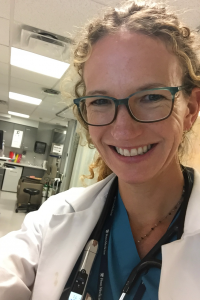 Nova is from Philadelphia, PA and joined the Susquehannock staff in 2016.

Dr. Nova Panebianco grew up in Eastern Long Island spending her summers playing in the ocean, working on a farm and going to gymnastics camp. By the time she was a teenager she had decided that she wanted to be Indiana Jones when she grew up, and to fulfill this idea at age 16 she enrolled to be an exchange student to Jakarta, Indonesia. She spent her senior year of high school in the Asian mega-city, and there learned many important things like how to make friends that are uniquely different than
you, be responsible for your things, and how to adapt to a new  environment – not all that different from summer camp! After spending almost two years in Nepal, Mongolia, and India she decided that medicine was the best way to satisfy her desire to be part of the bigger world while making a difference on an individual level.

Dr. Panebianco completed Emergency Medicine residency training at North Shore University Hospital (Manhasset, NY) and fellowship training in Emergency Ultrasound at the University of Pennsylvania (Philadelphia, PA). She also obtained a Master’s of Public Health in 2004 at the State University of New York at Albany. She joined the faculty of the University of Pennsylvania in 2009 after working in New York City for a year. She has authored several manuscripts, chapters, and has published a book in Emergency Ultrasound. She lectures nationally and internationally on this topic, is President of the American College of Emergency Physician Ultrasound Section, and is both the Ultrasound Fellowship Director and Ultrasound Division Director in the Emergency Department at UPenn. Her research is focused on procedural ultrasound, critical care, and women’s health.

Dr. Panebianco had three daughters in 14 months (including a set of twins) and was recruited to Camp Susquehannock in 2016. All three of her daughters attend Susquehannock and she has a vested interest in making camp safe, fun, and educational for all who attend and work at this amazing camp. She feels very grateful for the opportunity to care for and learn about all the campers and staff.