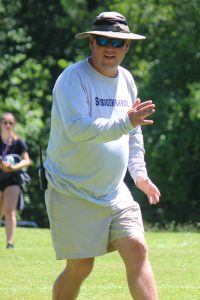 Jay is from Philadelphia, PA and is entering his 23rd season at Camp Susquehannock. He joined Camp staff in 1993 after 9 summers as a camper. After 14 years away, Jay returned to camp with his wife Jennifer and daughters Kaitlyn and Elizabeth, soon followed by his son Ryan.

Jay graduated from Conestoga High School (Berwyn, PA) where played Varsity Lacrosse, Swimming and Soccer. While at ‘Stoga, he won multiple league championships in Swimming and set league records in the 4×100 free relay and the 200 yard medley relay. Jay also won a league championship in Lacrosse and reached the quarterfinals in the Pennsylvania state tournament. Jay went on to attend The Citadel (Charleston, SC), eventually reaching the rank of Cadet Captain and serving on the student Honor Committee. Jay majored in Education at The Citadel and in 2005 earned a Master’s Degree in Educational Leadership from Villanova University (PA).

During his career Jay has taught and coached at The Episcopal Academy (Newtown Square, PA), The Phelps School (Malvern, PA), and Valley Forge Military Academy (Wayne, PA). Since 2010 Jay has served as the Dean of Students at Springside Chestnut Hill Academy (Philadelphia, PA) and as an assistant coach on the Varsity Lacrosse team competing in the Philadelphia Inter-Academic League. His players have earned All-League, All-State and All-American honors, and many former players are currently playing at the NCAA Division 1 level. Jay has also coached Soccer, Golf, and Cross Country. While coaching in the Philadelphia Tri-County League his Varsity teams won 3 Lacrosse championships, a Soccer championship and a Cross Country championship.

At SCH Jay leads yearly student canoeing trips on the Sassafras River in Maryland and multi-day sailing trips on the Chesapeake Bay. Jay attends the American Camping Association conference yearly and is certified in Red Cross Lifeguarding and First Aid.