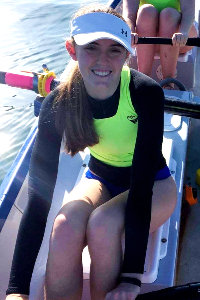 Caitlyn is from Auckland, New Zealand and and joined the Susquehannock staff in 2022.