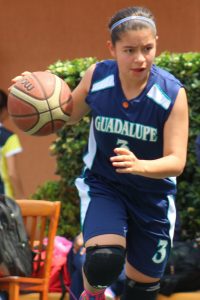 Ana is from Mexico City, Mexico and joined the Susquehannock staff in 2019 after 6 summers as a camper.

She currently attends The Guadalupe School and plans to study Medicine next year at university. Ana has played Basketball since second grade, eventually joining Instituto Politecnico Nacional, where she competed in the 2019 regional tournament for the National Olympiad in Mexico. Ana also enjoys playing Soccer and is a huge support of FC Barcelona.