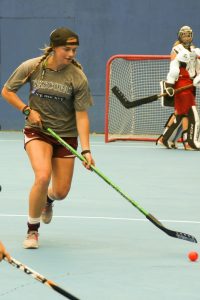 Ciara is from Malvern, PA and joined the Susquehannock staff in 2013 after 2 years as a camper.

Ciara graduated from The Episcopal Academy (Newtown Square, PA) where she played Soccer, Ice Hockey and ran Track. She went on to double major in Geology and Geography at Colgate University (Hamilton, NY) where she also played Club Ice Hockey and Rugby. She and the Raiders won the 2017 NSCRO 7s National Championship, after advancing to the finals for the first time the year before.

Ciara currently lives in Jackson, WY where she spends her free time playing sports, as well as getting sendy on the slopes, hucking double backies and taking face shots in the snorkel-deep pow during the winter ski season.