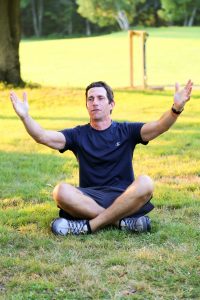 Andrew is from Winston-Salem, NC and has over 30 years at Camp Susquehannock as a camper, CIT, Counselor and Senior Staff member.

Andrew holds Undergraduate and Graduate degrees in Education from Wake Forest University (Winston-Salem, NC). He has fifteen years experience teaching and coaching at the Middle School level. Andrew grew up a multi-sport athlete playing Soccer, Baseball, Ice Hockey and Wrestling. While at Wake Forest he was a member of the Club Ice Hockey and Club Rugby teams. After graduation, he was a member of the gold medal-winning Ice Hockey team at the State Games of North Carolina.

While teaching at Summit School (Winston-Salem, NC), Andrew accepted the challenge of building a girls Lacrosse program. He led the program for seven seasons without a losing record and placed many of his players on local high school Varsity teams. Andrew also has experience coaching boys Lacrosse, and girls and boys Basketball. Andrew and wife Erika have been married since 1997. They have a daughter, Abigail, and son, Drew, both of whom are campers at Susquehannock.